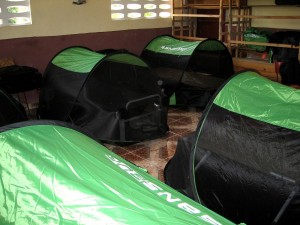 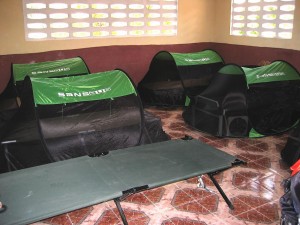 “All the disaster response groups before us had been using mosquito nets hung from the ceiling.  At our location we only had one ceiling cross beam in one room, so it would have taken a small engineering feat to make ceiling nets work.  The free-standing pop-up SansBug mosquito nets were definitely the right way to go for us.”

Here are some pics of the SansBug 2-person tents in Haiti taken by a group from North Carolina.  This was the first time that the SansBug has been used with a cot – most people place it on an air bed as can be seen from the previous pictures.  According to Dave, the cots were 6 feet long so it was a snug fit but it worked.

Since the SansBug II is over-sized, we asked him about extra baggage fees, if any, that they had to pay: “Because we told the airline that we were going to Haiti for disaster response they pretty much turned a blind eye to all of our additional check-in baggage.  That was really nice.”