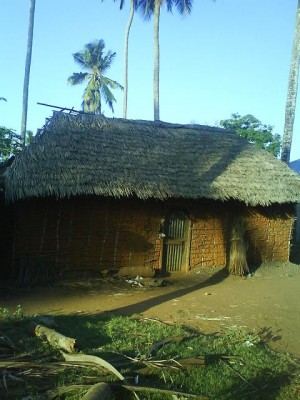 It had not rained for months and the cattle had to be taken far in search of grass. “The European breeds are not used to walking long distances and milk production has dropped,” explained Abdulla as we looked at the cows chewing cud in the shade. It was March 2008 and temperatures were hovering above 90. With the humidity, it seemed more like 120. Suddenly he spotted a heifer on the udders of a cow and he shouted out in Swahili to his manager. Soon, the thief had a muzzle on. “We have to be careful to spot such vices; otherwise we come in the morning to find little or no milk.”

I was in Gazi Bay, a quiet village 34 miles south of Mombasa, Kenya. In the international arena, Gazi is best known for its 2.4 square miles of mangrove forests and is probably the most studied mangrove ecosystem in the world. The resident population, about 1500 (most of whom survive on less than $2 a day), depends on the mangroves for house and boat construction, firewood and providing fish habitat. Some mangrove species are also used to make medicinal products, dyes and the green Avicennia marina logs are used to keep away mosquitoes since they are very smoky when burnt (the Kenyan coast is malaria endemic and about half of the hospital admissions are due to malaria). Overexploitation of the forest has led to degradation but thanks to reforestation efforts, more than 1 million trees have been replanted at Gazi.

Abdulla invited me home for a delicious meal of biryani, a spicy dish of rice and meat which is very common in the muslim world. Behind his house was a tree with one almost-ripe jackfruit growing from the trunk, several meters high. I loved jackfruit but I never knew that they grew so high off the ground, much less directly from the trunk. It actually is the largest tree-borne fruit in the world, weighing up to 80 lbs. I wouldn’t want to be under one of those when it fell! Abdulla promised me he would send it to me in Mombasa when it ripened. 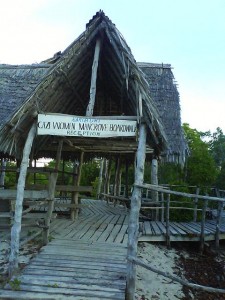 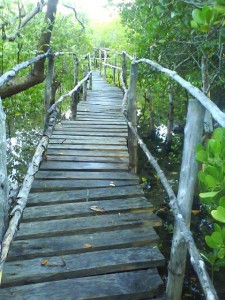 After lunch, I got a tour of a boardwalk through the mangroves. It was built by the locals to provide a source of income to the community and to raise awareness of the need for conservation efforts. In South East Asia, villages sheltered by mangroves suffered less from the tsunami as compared to the open stretches of coast which felt its full effects.

Not wanting to be caught in the Sunday evening traffic jam at the Likoni ferry, I left Gazi around 4pm after loading my car with oranges and apple mangoes (a mango cultivar whose flesh is firm, sweet and doesn’t leave fibers sticking in between your teeth). The oranges are a little dried out, Abdulla told me as he bid me kwaheri… hopefully it will rain soon…

In commemoration of World Malaria Day on April 25, Hakuna Matata Tents would like to donate a share of the proceeds from its SansBug tent sales. Until April 24, for every 20 tents that are sold, we will donate one tent to a needy family in Gazi. Ahsante sana!