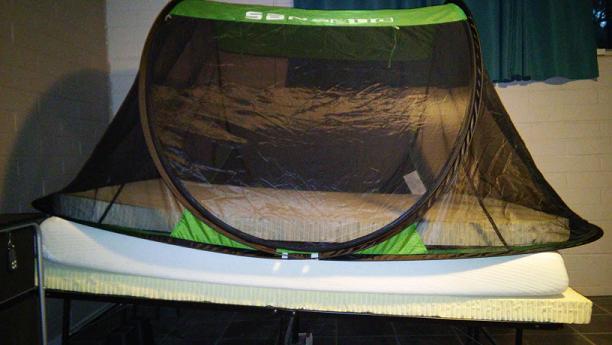 Trivia question of the day – which is the most venomous scorpion in North America? Ding, ding, ding… you guessed it, it’s the bark scorpion!  Its venom is so painful that many victims have described sensations of electric jolts after being stung.  It is the only scorpion in the southwest that can climb walls and other objects with a rough surface and it so resilient, that it has been found at ground zero after nuclear testing!

So we don’t blame Paula who lives in the southwest desert in scorpion-country for seeking refuge in a SansBug tent:

Everyone thinks I’m crazy but I’m deathly afraid of the Bark Scorpions which have suddenly become invasive in the Coachella Valley.  I can now sleep without worry inside my tent.  I took a (full bed size) piece of talalay foam and cut off the corners to fit inside.  A mattress pad and sheets and it’s as cozy as can be.