Almost nine months later, Haiti does not look much different than it did a few days after the earthquake.  The disaster response was delayed and recovery is frustratingly slow, primarily because of lack of funds.  Very little of the money pledged by the international community has been received.  Meanwhile more than a million people continue to live in temporary shelters among the rubble.  The shelters don’t offer much protection; last Friday a storm ripped through Haiti killing five and shredding and washing away thousands of shelters.  Many people lost all they had – for the second time.

While they wait for crushers, dump trucks and other heavy equipment to clear the mountains of rubble, volunteers like Stephanie are using their own money, time and effort in helping Haiti.  Stephanie had gone through Hands On Disaster Response, a US-based volunteer-driven non-profit organization.  Although HODR assists volunteers with housing, meals and tools, volunteers have to pay their own airfare.  Stephanie spent her time removing rubble, visiting orphanages, assisting in laying down a foundation of a school, building water filters and mentoring students in a youth club.

She had taken a SansBug 1-person pop-up mosquito net for the trip and according to her “it was a wonderful thing not to worry about bringing a heavy tent or sleeping in the bunks.” 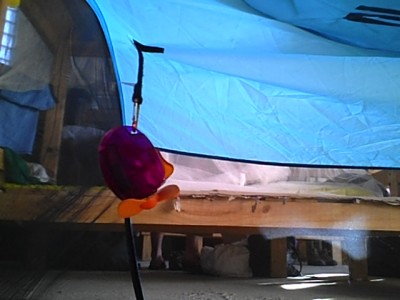 We had told her that a group heading to Trinidad took the tents as carry-on and stowed them in the overhead bins.  She also did the same without any problems.  The fact that the 1-person tent “can fit comfortably” in the airplanes’ overhead compartment considerably increases its value as a travel net.  Stephanie had also attached a “ceiling fan” to make her bug hut even more comfortable in the heat.  Her take on the tent?  “I quite enjoyed it and will use it again on my next trip down… hopefully in December.”  We hope that the international community will have come together by then and that she will see a substantial dent in the mountain of rubble.