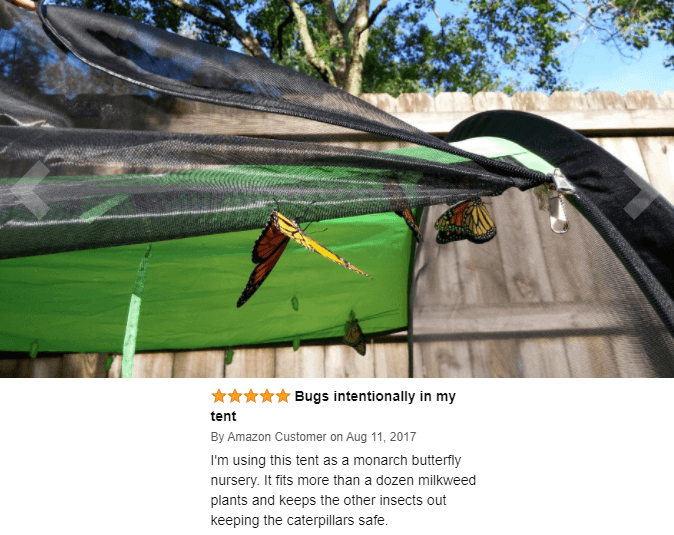 We’re thrilled that the SansBug mesh tent is being used as a giant insect terrarium to house monarch butterfly caterpillars.  Much larger than butterfly cages specifically made for the purpose, the smallest SansBug bug tent can house more than a dozen milkweed plants.

Monarch butterflies with their familiar orange and black pattern are known for their annual migration where some of them travel more than 3000 miles!  Considering the butterfly weighs only about half a gram, that’s mind blowing!

The epic migration south is done by the same super generation which lives up to 8 times longer than their parents and grandparents.  The return journey north to US and Canada is done in 3 or 4 generations.

Western monarchs have seen numbers dwindle by more than 99% in the last 30 years.  Eastern monarch numbers have gone down by about 80%.  The number one reason for their decline is the reduction of milkweed, a wildflower, which is the only food the caterpillars will eat.  Milkweed has been decimated because of indiscriminate spraying of herbicides across genetically modified corn and soybean fields and mowing along road sides.

Lately, there has been a growing call to reverse this population decline by encouraging people to plant native milkweed in their yards and cities.  And since survival rates are only 5% in the wild because of ants, spiders and other predators, the SansBug bug tent provides a safe rearing tent to increase that to more than 80%!  While rearing tents will not reverse the population decline, they are a great tool to learn and observe the amazing metamorphosis from egg to adult.