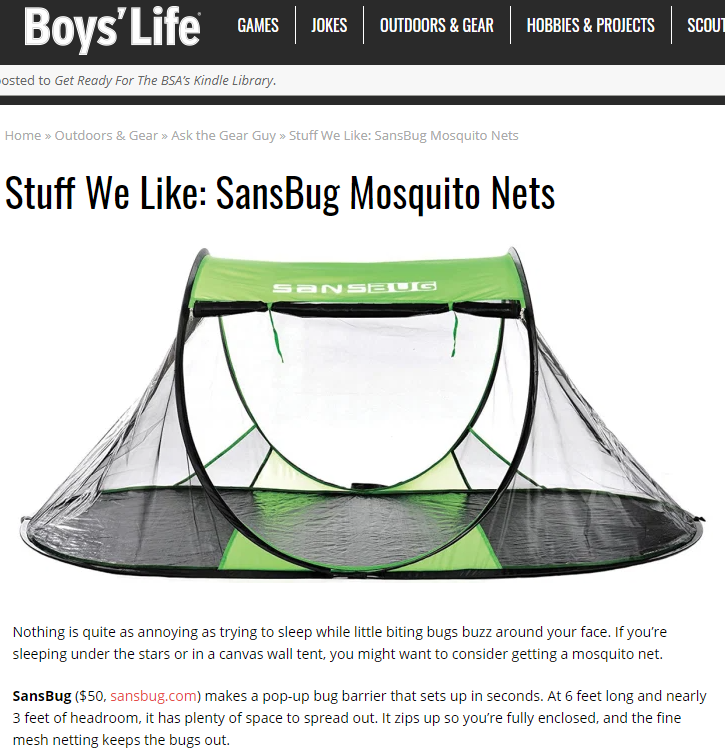 We’re thrilled that the SansBug screen tent has been featured in Ask the Gear Guy section of Boys’ Life magazine under… Stuff we Like!  The SansBug has helped thousands of Scouts and their parents brave through summer camp.  Feedback such as “first time he came home without bites” and “first year he stayed at camp all week” is common with the SansBug.  We strongly believe that the SansBug bug tent is an important tool to boost retention rates.

“I will stipulate, again, that the SansBug including fly is still the safest tent in the Scout campgrounds because it does not need the guy lines which pose the most dangerous tripping hazard.”

Recruitment is almost always easier than retention.  Nothing beats the old fashioned word of mouth for recruiting youth into Scouting.  It can happen organically by Scouts telling other youth of the rock climbing they did last weekend, or the model rockets they’re going to launch at the next troop meeting, or the wicked camp they went to last summer where they had whitewater rafting, horseback riding, mountain biking, zip-lining, kayaking and so much more.  Parents can also tell other parents of how Scouting has had a positive impact on their child.  Those experiences can then be used in ad campaigns to amplify the word of mouth marketing.

But once you get youth to join, how do you make sure they stick around?  The outdoors is a major part of scouting; it’s not just about dull meetings in a basement or selling popcorn.  However, fewer and fewer kids are spending time outdoors… kids today spend an average of 7 minutes a day playing outdoors vs. 7 hours in front of a screen.  How much of that outdoors has green space is another issue but the disconnect with nature makes many kids anxious about bugs, insects, spiders, or even the dark.  Getting Scouts who have these fears to stay at camp for the whole week is difficult, much less expecting them to return the following year.  Are they just going to tolerate camp one year or will they look forward to next year?

Paul Kautz of BoyScoutTrail.com is a Red Cross authorized provider of CPR/AED and Wilderness First Aid training and Master Educator of Leave No Trace.  He was a Scoutmaster for 7 years and he knows of a few young scouts just starting out who missed some great campouts because they were scared of the bugs.

Providing a safe cocoon at night when most critters are active has helped thousands of Scouts enjoy summer camp.  Netting draped over poles has always been there but critters are still able to come in through the floorboards.  And it’s not just about not being able to sleep because daddy long legs is looking down at you from the corner of the canvas tent, mosquitoes can come in through the floorboards and spread disease or at the very least keep you up by buzzing in your ear all night.  The SansBug mosquito net tent has a sewn-in floor so it’s totally enclosed.

“Life changing! My son has a bug issue this year so we got him one of these and it’s working out great for him!”

“First year he stayed at camp all week!”

It’s not just the kids, even the grown ups take comfort from the instant refuge.

“There were flying cockroach looking bugs that came out at night, but my daughter and I slept securely knowing no bugs were going to crawl on us.”

If you can help conquer or at least manage Scouts’ (and their parents’) fears, they can then focus on learning new skills and enjoying the outdoors and camping.