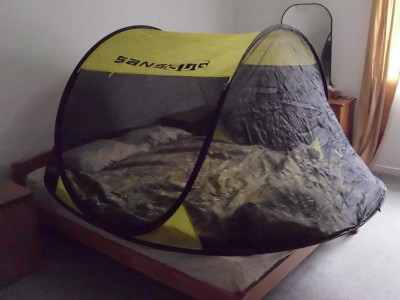 After Amy Terlitsky mentioned the SansBug’s ability to protect against bedbugs, we’ve seen quite a few sales for the same purpose.  Mark, a graduate student at UPenn, sent the following:

“It’s only been a few nights so far, but, as far as I can tell, I have not been bitten since I started sleeping in the tent! (And that’s after 2-5 bites per night, nightly, prior to receiving it, on the extremities or my neck.) I only washed my bedding the first night, too — I haven’t been very vigilant or diligent about not bringing eggs and nymphs in with me. I suppose I might get a few bites if some eggs hatch, but then I’d just wash all the bedding again and wipe down the tent. The tent is definitely helping me preserve my sanity until I get a professional in!”

And here’s an update a few days later:

“Still no bites. All the old ones are fading, so I should be able to easily tell if I get a new one. It’s fantastic.“