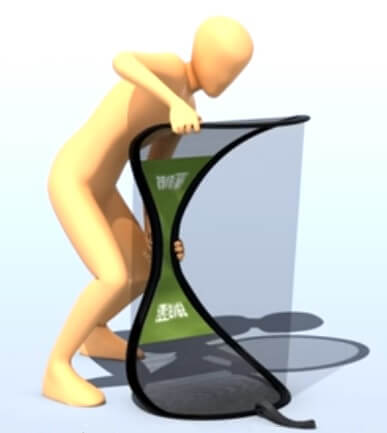 Every year, we get an email or two saying that when they pulled out their SansBug for summer camp, they found that the poles were splintered… and it was fine the previous year.  Folding the SansBug is not intuitive.  The paper instruction manual is only supplementary.  The demo video on YouTube is crucial without which you will likely want to cut the net into pieces and burn it.  But some camps have an “unplugged” policy and don’t allow cellular or WiFi capable devices.

Therefore it is extremely important to practice at home SEVERAL times before going to camp.  As seen from the reviews, many 12-year olds have mastered the folding so it’s not rocket science.  Unfortunately getting everyone (especially adults!) to watch a demo video is impossible so many rely on their memory and end up breaking the poles without even realizing it.

You can get the hang of it for one summer and you’ll think you got it down but you DO need to watch the video AGAIN the following year BEFORE going to camp.  You can forget a lot in 11 months and folding the SansBug is not easy to remember!

Nick from OR is going to be using his SansBug for his fishing and camping trips.  He looks forward to staying shielded in the SansBug as he waits for a bite (from a fish!) and he’s happy he doesn’t have to slather insect repellant all over himself.  He had this to say about the folding:

Let me tell you . . . I can usually figure things out as I go without looking at instruction manuals, but not this time. After spending about 5 minutes trying every combination of twisting and folding the poles, I gave in and pulled out my phone to look up the video.

As soon as I watched the folding demonstration in the video, it all made sense. In a few quick maneuvers, the tent folded nicely into its disc shape.

Moral of the story?

Learn from my mistakes and watch the video BEFORE attempting to fold the tent like the instructions say and save yourself the frustration.

I’ve since figured out how to fold the SansBug quickly; it takes me about 20 seconds to get it from on the ground to in the bag!